All go at Norwich Hackspace

Updated January 2023 Happy New Year! Potential members and visitors are welcome on Monday evenings 7-9pm at our premises in Muspole Street, Norwich NR3 1DJ. We have limited access for wheelchairs but we will do our best to accommodate any needs. Please email info@norwichhackspace.org in advance if you want to visit. Click the title for more news about our activities in 2022

Car Speedo - Zero problems but I got one

For background please take a look at the first Speedo post.

So I was all smug after the first post that I had finally found a rock solid solution to the speedo gauge mechanism. However during testing a problem came up and that was with the zero com...

These Weeks at Hackspace - 15th and 22nd March

This week (I may have forgotten last week's post!) the hackspace was a little quiet but still lots going on, including:

Good mix of activities on Monday this week.

Neil was in the workshop creating plenty of wood chips on the lathe. James brought in an xBox One Kinect Camera (v2) which was used for 3d scanning and skeleton tracking via the windows SDK. Now the plug packs have come down in cost there seems to be plenty of hacking potential here - A definite upgrade on the 360 Kinects we have been using.

Tim 3D printed a couple of designs his son had put together in Blender and the laser cutter got some use as well: Alan laser cut a spool holder he designed for his 3D printer. We started a 'members' projects' wh...

This week at hackspace is much quieter compared to last week. On Monday….

Norwich Young Makers Club is running open access drop-in sessions for 8-18 year olds and their parents to help them to get familiar with tech projects and coding. Sessions run every fortnight on Saturday afternoons 2-4pm

Can you laser engrave a Macbook without frying it? 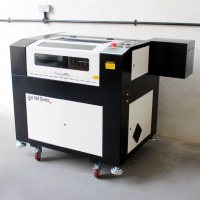 After a long wait we finally took deliver of a fine Greyfin A2 laser cutter. LASER all the things!

The Men's shed has provided us with a home for nearly a year now. While they have been gracious hosts we have always planned to have our own space. We currently have access to Men's shed for 4 hours a week and with the new space we will be able to open everyday.

The developers Architekton have a £100 millon development project in process which will convert several large buildings into housing, shops and resturants. Read more in this EDP article: http://www.edp24.co.uk/property/revealed_100m_vision_for_former_norwich_shoe_factory_1_4599324

As planning can take a very long time Archi...